I have a question about living in the Philippines. I am part Sco 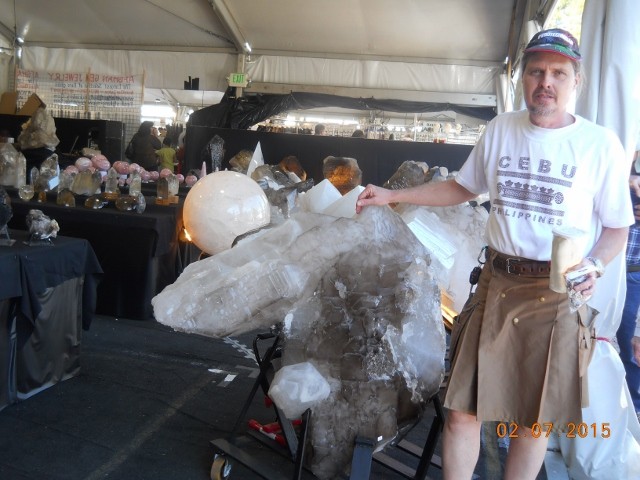 I have a question about living in the Philippines. I am part Scottish, Cherokee and Polish. Not too long ago I started wearing utility kilts as part of my everyday clothing. Utility kilts are like cargo pants with lots of pockets, but it is a men's kilt, not pants. It is much more comfortable than even short pants, especially in hot climates. I am asking if this article of clothing is acceptable in the Philippines. Since I am part Scottish, that is also a part of my heritage. I am also part Native American, but I certainly don't think wearing a bahag will go over very well ANYWHERE. Attached is a photo of this type of kilt. That is me at the Tucson Gem Show. Just wanting input.... thanks!
Reply

May 07 2020, 10:00pm CST ~ 3 weeks, 1 day ago.
@Korki that would not be a problem. First, we have Igorots who wear bahag and they dance in public. We love and respect them. Second, You just do not show your legs if you are at work (office, bus driver, taxi driver, habal-habal or motorcycle for hire, tricycle, jeepney driver, truck driver). If you are a passenger or a customer, you're good. Always have your mosquito repellent handy. There are mosquitoes everywhere specially outside of the buildings at night time.
Reply

Korki
May 07 2020, 10:09pm CST ~ 3 weeks, 1 day ago.
Thank you Redlotus45. That is encouraging. I have been to the Philippines 3 times and like it a lot! My family (when I married a Filipina her family became my family) lives in the barrio in Luzon, away from the city. We see carabao, rice and corn fields, kids shooting homemade cannons, guys on bicycles at 5:00am honking horns and selling pandesal. I have not seen Igorots wearing bahags, but then we would have to go to Baguio or Banaue, no? But, Lord willing, we would like to live there. Salamat!
Reply

May 07 2020, 10:33pm CST ~ 3 weeks, 1 day ago.
Yes Baguio or Banaue. My warmest welcome to you. Come and stay here. And enjoy eating real food. We have a lot more that you must see, pineapples, sugarcanes, coconuts, papaya, avocado.. and a lot more.You said "Salamat", I say: walang anuman. no worries.
Reply

Bituingmaykinang
May 08 2020, 1:51am CST ~ 3 weeks, 1 day ago.
@Redlotus45 Igorots don't wear it on a daily basis though.I lived amongst the Igorots so I hope non-Igorots stop exoticizing themAs a matter of fact, you would come across Igorots wearing cowboy boots and hats than bahag.And sorry to burst your bubble, Filipinos don't generally love Igorots. Filipinos have made them the "poster child" of "precolonial culture" but that does not translate to respect. People still say "Ang pangit mo mukha kang Igorot" or "para kang Igorot, hindi sibilisado". I can go on with other forms of discrimination like not letting an Igorot wearing a bahag inside a public transportation.
Reply

Ahkasi
May 08 2020, 7:46am CST ~ 3 weeks, 1 day ago.
@Korki You are going into another culture. you cant expect them to understand or accept things that are foreign to them, you will probably get giggles, or bakla jokes, but most people wouldnt say anything directly to you. Nor would they care more than just seeing you as a passing oddity, they still look at me funny when i wear a cowboy hat.
(Just my opinion)
Reply

Korki
May 09 2020, 10:21pm CST ~ 2 weeks, 6 days ago.
@Ahkasi I figure that I will probably leave the kilts at home and just wear t-shirt, short pants and flip flops or shoes, though I might have a couple on hand just for around the house. I have been watching the YouTube show called "Becoming Filipino" and notice a lot of Filipinos wear sleeveless shirts to make it more comfortable in the heat. I would probably wear those. Some guys where I live wear cowboy hats and some even carry guns, but I only see that once in a great while. But I will say there is nothing bakla about a cargo kilt; nothing frilly or effeminate about said garment. I saw a guy in a grocery store wearing a camoflage kilt with pockets, and he was as burly and macho as they come. Think "Braveheart". At any rate, salamat for your response...
Reply

Korki
May 09 2020, 10:31pm CST ~ 2 weeks, 6 days ago.
@Bituingmaykinang As far as I can tell, Igorots are as much Filipino as those living in Manila. Just like where I live, Native Americans are not only as much Americans as Anglos, they are the ORIGINAL AMERICANS. Columbus did not discover America, there were hundreds of thousands of Native people here when he arrived. He was like a guy who is an hour late to a movie. Native people also wore bahags, but not any more. We have lots of Navajo and Hopi people here in town, and I worked with them and learned some of their language. But I never seen even one wearing a bahag, except during pow wow dances. They are the nicest people; we have a Navajo family living next door and we get along just fine. In fact, he helped me fix my fence that needed repair. So the Lord does not favor one people group over another. He made Igorots. He made Apaches. He made Bisayans, and Ilocanos, and Anglos and so on... and all alike are accountable to Him. Just a thought.
Reply

Bituingmaykinang
May 09 2020, 11:58pm CST ~ 2 weeks, 6 days ago.
@Korki I never said Igorots are not as Filipino as people from Manila. Read my post again.What I am saying is most Filipinos make Igorots the "poster child" of precolonial culture but will not hesitate to discriminate them due to percieved "otherness", "backwardness", "lack of civilization". It is common in the Philippines to equate "Igorot" to "ugliness"...people still say "you are ugly, you look like an Igorot". Or perhaps, this statement by an academian who said "Igorots mixed with foreign missionaries TO IMPROVE THEIR RACE": www.baguioheraldexpr essonline.com/igorot s-dereid-claims-of-g ood-features-coI can even tell you that Department of Education books even confuse them with the Aetas like putting in books that the natives of Mountain Province are the Aetas and the Igorots are from a place called "Italia". These are books published in the 21st century, the 19th century: www.cordilleransun.c om/2016/11/erroneous -and-misleading-info rmation.html?m=Is it really hard to understand and believe that Igorots and indigenous peoples are still heavily discriminated in the Philippines?Badjaos are an ethnic group in the Philippines - they are a sea gypsy kind of people - but mainstream Filipinos equate the world Badjao to "beggar". They will use the word Badjao to refer to a beggar even if the beggar is a Tagalog/Cebuano/Ilocano/etcI even have not added here a more "unseen" discrimination which is land grabbing, usually by lowland oligarchs. It's not only the Igorots who suffer this but other indigenous groups like the Lumads in Eastern Mindanao.Anyone who says "gone are the days of discrimination" are not well aware of the plight of the indigenous peoples at the hands of the hispanized majority. Just ask the Bangsamoro people.
Reply

May 10 2020, 1:23am CST ~ 2 weeks, 6 days ago.
> I even have not added here a more "unseen" discrimination which is land grabbing, usually by lowland oligarchs. It's not only the Igorots who suffer this but other indigenous groups like the Lumads in Eastern Mindanao.This is why Lumads are converting en mass to islam. The bangsamoro groups convert them and then help them keep their rights to their lands.
Reply

May 10 2020, 2:54am CST ~ 2 weeks, 6 days ago.
Why are there people who make it appear that they are speaking in behalf of everyone? I was born and raised in Mindanao. My mother is an Ilongga and my Father is a Lumad. My great-grandfather used to own a vast land now, nothing was left for us. It is because the great grannies did not value their lands as people value land nowadays. They had voluntarily exchanged their lands for bags of salt and cans of sardines. We moved on. We went to school and studied as much as we could. We converted into Christianity. Can you tell me those Lumads in Mindanao who asked for Muslims help to keep their lands? My Muslim friend died in the midst of their fight for their ancestral domain, until now, there is no sign of victory.
Reply

May 10 2020, 5:25am CST ~ 2 weeks, 6 days ago.
"While retaining their own ethnic identities, Lumads in Moro-dominated areas have routinely intermarried with Moros, converted to Islam"Oona Paredes (2015) Indigenous vs. native: negotiating the place of Lumads in the Bangsamoro homeland, Asian Ethnicity, 16:2, 166-185, DOI: 10.1080/14631369.2015.1003690Routledge Handbook of the Contemporary PhilippinesMany Kalagan and Subanon ethnic members are converting to islam and intermarrying with Bangsamoro tribes.The plight of Palawan and Mindanao indigenous peoples is a sad one and I'm glad some educational and productive discourse came about. Anyways, I predict this thread will be closed soon. This is after all, a Tagalog learning forum.
Reply

Korki
May 10 2020, 7:56pm CST ~ 2 weeks, 5 days ago.
Hmmm... All I was asking is if wearing a kilt is okay in the Philippines; and concluded that I should not. I was asking some advice from you who are in the know, and will take that to heart. I did not intend for it to become controversial. I will have respect for the culture and customs there, and already know some since my wife is a Filipina and so I have a head start learning vocabulary. That is my goal here. So let us move in that direction. Salamat.....
Reply

Ignatius
May 18 2020, 1:39pm CST ~ 1 week, 4 days ago.
Kilts will immediately be seen as "palda"; a skirt. I'd steer away from wearing them in public. Same way in Los Angeles, no one wears kilts unless they just came from a Scots dance lesson.Filipinos are very tribal and have many dialects and subcultures. There's always discrimination, rich and poor, city folk and country folk, etc. No different than other humans. This is not to say they are bad. There's just distinctions.
Reply
12»
Post a Reply»

CORPUS
Become a patron
We love our supporters! :)
© copyright 2020. Do not reproduce content or audio without prior written authorization. We put a lot of hard work and TLC into this website -- please don't copy our content without permission.